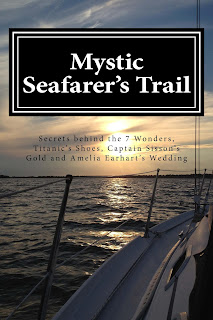 
Moments after I stepped out of my new home with my hound for our first stroll through the historic seacoast village of Mystic, Connecticut, a woman pulled over in her van and yelled, "Excuse me."


Assuming she was a tourist wanting directions to Mystic Pizza or some other attraction, I wasn't prepared for what she really wanted to know.


"Do you realize the back of your skirt is tucked into your underwear?"


What a debut in my new hometown—I don’t think this is what National Geographic meant when they named Mystic one of the top 100 adventure towns in the United States.


Once recovered from my wardrobe “malfunction,” I continued toward downtown Mystic with Bailey, a beagle/basset hound mix, to embark on a new life—to shake off my old, sedentary landlubbing ways.


No longer did I want to be known as the lady who always talks about losing weight but never does it. No longer would I sit around daydreaming about becoming thin and famous so I could hire someone else to clean my house. I had a real shot at it now that I lived in a place where I couldn’t help but fall into a swash-buckling adventure—the kind that might inspire me to write a bestseller.


Straddling both sides of the Mystic River in the towns of Groton and Stonington, the village of Mystic takes its name from an Indian word, “river running to the sea.” With its scenic views of tall ships, islands, lighthouses, and secluded coves, it has attracted such legendary honeymooners as Humphrey Bogart and Lauren Bacall. It is a place where those who cross the oceans gather to swap stories and repair their boats. It is where famous explorers are born, visit, or come to live.


To launch my career as an adventuress, I decided to walk Bailey to the haunts and homes of such celebrated adventurers as Amelia Earhart, the first woman to fly solo across the Atlantic;  Dr. Robert Ballard, the discoverer of Titanic’s watery grave; Rear Admiral Richard E. Byrd, the first aviator to fly over the South Pole; and Captain Nathaniel B. Palmer, who accidentally discovered Antarctica.


Now was the time for me to join their ranks, to start living life on the edge. Maybe I could become thin and famous like Amelia Earhart. Like her, I am fairly tall, my middle initial is M, I have a gap between my two front teeth, and until I looked it up, I couldn’t spell medieval either (more on that and her wedding day later). Unlike Amelia, I wasn’t skinny, but that was about to change. I would stop lying around reading about adventurers and do what it took to become one.


My husband, Jim, and I were transferred to Mystic by his company, which meant I had to quit my job as a writer for a college and search for a new one in a community that revolves around life at sea—not easy for a confirmed desk sitter like me. Finding the area already teeming with underemployed writers and publicists, I was grateful when my former employer hired me back as a consulting writer. Although freelancing allowed me to work from home in my pajamas, it offered no retirement benefits—hence the need to become famous. Being famous not only helps pay the bills, but it gives you an edge when trying to accomplish other goals.


Now was the time for me to follow in the path of prominent authors such as Herman Melville who went to sea on a whaler (a ship designed to catch whales and process their oil) when he couldn't find a job. Although he deserted and had to live among cannibals for a time, he found the inspiration to write his first novel. Further sea adventures, which included mutiny and learning about a whale that rammed and sank the Essex, led to the creation of his magnum opus: Moby Dick. I, myself, could barely get through this “Great American Novel,” but somebody must like it. And now that I lived within walking distance of the Charles W. Morgan, the last wooden whaleship in the world, I felt that was a sign. Perhaps I could enlist as a deck swabber for some epic voyage on it. The house we purchased came with a brass, whale-shaped door knocker. That had to be a sign.


If following in the footsteps of a whaling writer didn’t work, there was always the chance I could get famous by finding a dead body—just like Bailey and our older daughter had. Although it didn’t make her into an international celebrity, I use it as a party stopper whenever I want to be the center of attention. Of course, I should really find my own body, preferably of a well-known person. Celebrities are always coming to Mystic to film movies or vacation.


Since I couldn’t count on finding a dead body, famous or otherwise, I decided to start small. First, I planned to compile “The 7 Wonders of Mystic”—something quick I could shout to the tourists who rolled down their car windows asking what they should see (besides my underwear).


National Geographic’s website suggests that Mystic adventurers bike what it calls the 25-mile Vineyard Loop that includes “some hairy climbs that stops at two of the best wineries.” Hairy climbs? I hoped to get thin, but did I have to go uphill to do it? I thought not.


Instead, I would conquer a trail of my own design—one that would avoid hills where possible—and call it the “Mystic Seafarer’s Trail.” It would include “The 7 Wonders” (once I figured out what they were) plus the spots where legendary adventurers lived, worked or got married in Mystic and nearby Stonington and Noank. It would include not only the haunts and homes of those adventurers already mentioned, but also of those you may have never heard of—such as Kate the acupuncturist who gave birth on a schooner and rowed to shore to weigh her baby on a lobster scale.


With so many potential wonders to consider and adventures to try, I had a lot of ground—and water—to cover. So, every afternoon, I checked my skirt and off Bailey and I went to follow a scent of our own.

More about Mystic Seafarer's Trail:
While searching for the Seven Wonders of Mystic with her beagle/basset hound, author Lisa Saunders uncovers the secrets behind the Titanic's shoes, Captain Sisson's hunt for gold, and Amelia Earhart's Noank wedding. But will she ever find an adventure of her own--one that will make her thin and famous? Enough to afford a housekeeper? When walking the Mystic Seafarer's Trail (which Lisa designed for those who don't like to go uphill), she meets a blind sailor who invites her on a long, winter voyage. Can this plump writer defy squalls, scurvy, and her fear of scraping barnacles to survive this epic journey? 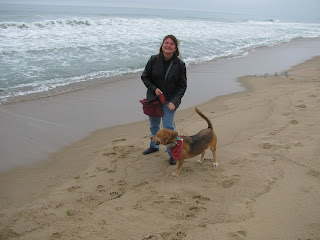