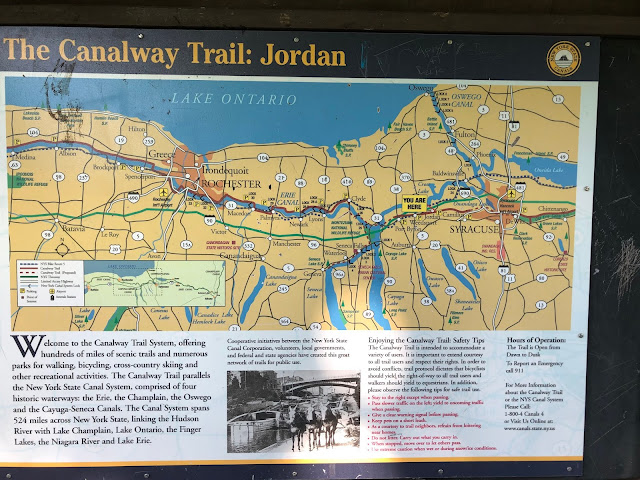 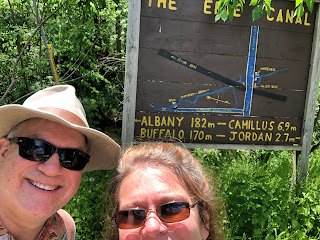 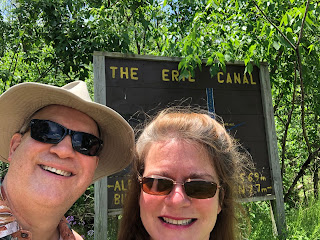 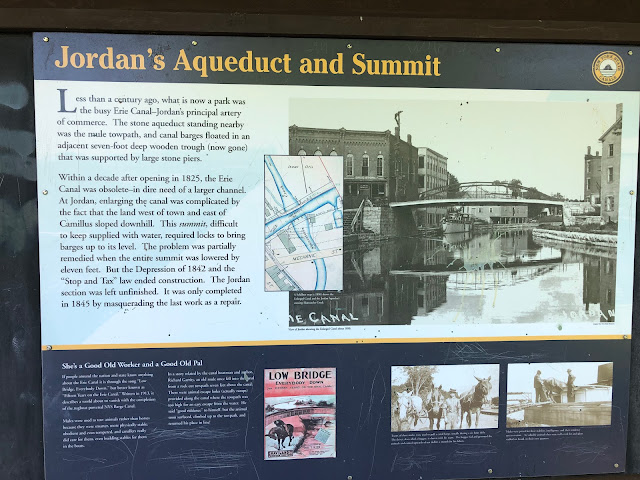 Posted by Lisa Saunders at 7:41 AM No comments: 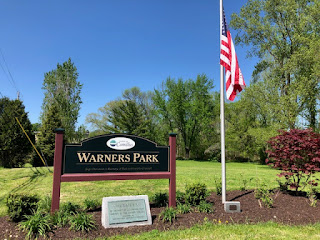 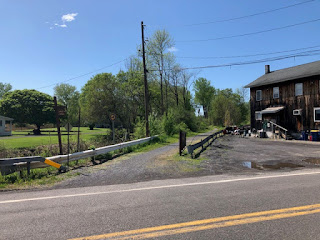 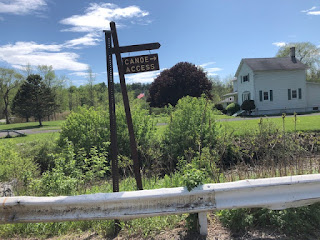 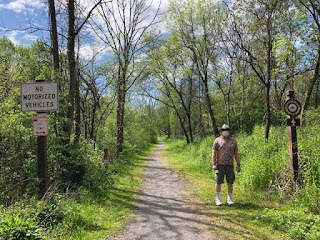 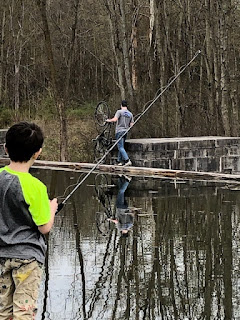 Man walks narrow ledge of aqueduct with his bike. 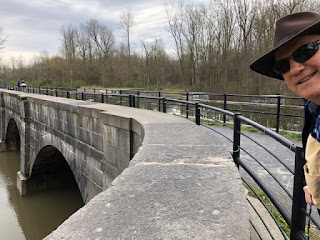 More Aqueduct info: http://www.eriecanalcamillus.com/aqueduct.htm
Posted by Lisa Saunders at 6:41 AM No comments: 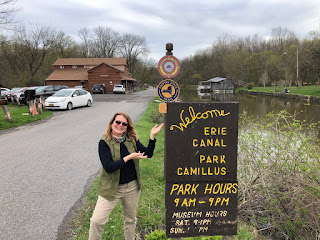 Here I am at the Erie Canal Park in Camillus, a great place to stop for its outdoor exhibits and proximity to the restored aqueduct. Park info: http://www.eriecanalcamillus.com/

Potential tourists to our area are asking me about our slow, weekly trek along different parts of the Old Erie Canal so they can plan their trip. Since we only want to walk about two to four miles a day, at most we go a few miles out then return to our car. Therefore, we are concerned about nearby parking and if we will find benches for resting and port-o-johns along the way. For more information on the Erie Canal and how to plan to bicycle/walk the trail, see this interactive map: https://www.ptny.org/cycle-the-erie-canal/trail-map

Soon, I will post images and comments highlighting the following. In regard to the Erie Canal Park in Camillus, we found:

Parking: Available at the museum.

Bathrooms: None when we were there because the museum was closed.

Benches: Plenty along our trek heading east and west.

Restaurants: None in walking distance.

Lodging: None in walking distance. 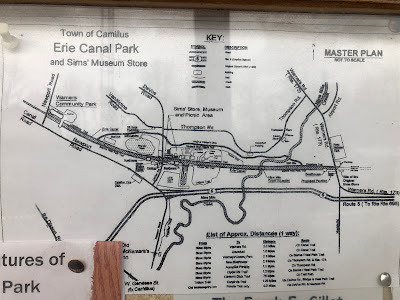 To get you in the mood the traverse the Erie Canal, hear the following classic Erie Canal song New York children learn in elementary school about a driver and his mule named Sal. I love the vintage postcards and unique movements used in this version: https://youtu.be/gIIM1mHfJ0U

Posted by Lisa Saunders at 5:24 AM No comments: 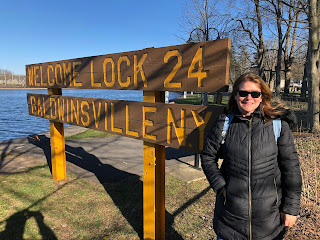 Author Lisa Saunders is seen on the Seneca River, along the modern Erie Canal, in  Baldwinsville, New York, where she now lives with her husband Jim. The sign welcomes boaters coming from the direction of Buffalo to Lock 24 where they will be lowered 11 feet, as in an elevator, to the next leg of their journey eastward toward Albany.  Lisa and Jim love strolling beside and above Lock 24 to watch boaters from all over world make their way from the Atlantic Ocean to the Great Lakes. (Lock 24 is the second busiest lock on the modern Erie Canal.
See drone footage and video: life, past and present, at Lock 24.)
The Erie Canal, completed in 1825, was the "longest artificial waterway and the greatest public works project in North America." (https://eriecanalway.org/learn/history-culture)
INTRODUCTION

Having moved with my husband Jim in 2019, to the upstate New York village of Baldwinsville (near Syracuse), from the boating community of Mystic, Connecticut, meant I could leave behind the shame of abandoning ship as told in my book, Mystic Seafarer's Trail, to embark on my next adventure—walking beside the longest artificial waterway in the United States. Our new plan is to trek the entire 360-mile Erie Canalway Trail, which follows both the active and historic Erie Canals between Lake Erie’s shore in Buffalo and the Hudson River in Albany. Although this engineering marvel is considered the 8th Wonder of the World for digging a ditch through rock and swamps to raise and lower boats as in an elevator, how hard can it be to simply walk the flat path beside it around the water falls and through the Appalachian Mountains? It can’t be as scary as sailing. If a mule named Sal could do it, so could we!

Sal, the mule featured in the Erie Canal song, “Low Bridge! – Everybody Down” by Thomas S Allen (1913), is taught to all of us who attended grammar school in New York. The song memorializes the Canal’s mule barges of the 1800s that made boom-towns across upstate New York and transformed the state into the “Empire State” it is today.

When my grandson sang these words to me one day after I picked him up from preschool in 2019, it took me back to my school days over half a century ago:

I’ve got an old mule and her name is Sal, Fifteen years on the Erie Canal

She’s a good old worker and a good old pal, Fifteen years on the Erie Canal

We’ve hauled some barges in our day, Filled with lumber, coal and hay

And ev’ry inch of the way I know, From Albany to Buffalo

Low bridge, ev’rybody down, Low bridge, we must be getting near a town

If he’s ever navigated on the Erie Canal...

Just prior to Jim retiring as a scientist from Pfizer, Inc., to move to Baldwinsville to be near our grandchildren, I had considered kayaking the entire active Erie Canal with my friend Sue, but decided that would require too much dedicated time and impossible paddling through the icy long long winters of upstate New York. Plus, Jim and I moved into an apartment rather than buying another house, making storing kayaks difficult. We also moved my mother nearby, and though a stroke survivor, she no longer drives so we must be available. Driving to walk different segments of the Erie Canalway Trail makes sense for now.

So far, we have endured all sorts of weather to follow in mule Sal's footsteps as she traversed the well-beaten towpath along the old Erie Canal. Although some stretches of the old Erie Canal are so overgrown it's hard to see its imprint, we love searching for hints of the hidden stone walls as we walk back in time. Of course, every time we walk across an aqueduct with its stone arches or climb down into an old lock, it's quite a thrill.
This exercise and writing project is ideal for me--especially since I'm still trying to get thin and famous so people will listen to me! But things like politics, Zika and now the pandemic are always getting in the way. Between cover-ups and new issues exciting the media, my news, along with that of countless other parents, doctors and researchers, remains overshadowed or disregarded. For years, we have been muffled as we try to shout from the rooftops about how to prevent another "C" virus--congenital cytomegalovirus (CMV), the leading viral cause of birth defects. Women have a right to know how to protect their unborn children from it but they are not being told. CMV is another one of those "inconvenient truths."
As I continue to walk and research the history behind the Erie CanaI, I can relate to the struggles of folks like George Washington and the merchants, politicians and engineers who worked to find ways around water falls and through mountains.
When construction on the first Erie Canal ("Clinton's Ditch") was completed in 1825, New York Governor DeWitt Clinton celebrated the end of "all the years of hope and anger, progress and retreat, and design and redesign" (1) with a boat parade from Lake Erie, where he filled a green keg with water, to the southern end of the New York Harbor (Sandy Hook), where he poured the Erie water into the Atlantic Ocean. He declared to his companions, "...may the God of Heavens and the Earth smile most propitiously on the work, and render it subservient to the best interests of the human race." (2)
Just as the first Erie Canal opened our nation to the west, promoting trade, immigration and ideas, such as women's rights and the abolition of slavery, throughout the world, I believe knowing how to prevent, diagnose and treat CMV will also be in the "best interests of the human race."

"Perhaps no single cause of birth defects and developmental disabilities in the United States currently provides greater opportunity for improved outcomes in more children than congenital CMV. Given the present state of knowledge, women deserve to be informed about how they can reduce their risk of CMV infection during pregnancy..." (3)

Here is what I hope walking the Erie Canalway Trail will accomplish:
While searching for the 7 Wonders of the old Erie Canal, itself considered the 8th Wonder of the World, an upstate New York plump baby boomer wonders if she’ll ever finish walking the entire 360-mile Erie Canalway Trail between Buffalo and Albany. So far, Lisa has endured swarms of mosquitoes, gunshots, snakes, snow, violent wind cracking tree limbs above, aching feet and a dead possum. Will she find an outhouse in time? Will she uncover what truly happened to Aunt Rebecca whose body was found in a car submerged in the Canal? Lisa’s progress is continually interrupted as the global pandemic upends her life with demands from her regal mother held prisoner in assisted living, and by home-schooling two young grandchildren when her daughter leaves her job in a castle to work remotely. When deciding on the 7 Wonders, should she only consider the overgrown, stone aqueduct arches and locks hidden along the Old Erie Canal, or also the engineering marvels on the modern, fully operational Erie Canal? And, how will this latest writing project ever get Lisa thin and famous when the only food near the trail is pizza and ice-cream? Trekking alongside is her detail-oriented, rather fussy husband, Jim. They haven’t spent this much time together since their undergraduate days at Cornell. Now a retired Pfizer scientist, Jim is ready to share in Lisa’s latest adventure, hoping to combine their talents to raise awareness of another “C-virus” plaguing the country, cytomegalovirus (CMV). Will their fight for an amendment to the current CMV law in the State of New York be as tough to pass as the legislation to build the original Erie Canal, derogatively called "Clinton’s Ditch"? Will they agree on the 7 Wonders, what kind of pizza to order and overcome the obstacles on the Trail to impact the world—much the same way the Erie Canal did?

Ways to have fun on the Erie Canalway Trail
Ways to help women protect their unborn babies from CMV
To help New York women/babies
Follow my NY CMV Facebook page: https://www.facebook.com/NYCMV/
I plan to send out press releases to the media in hopes of reaching strangers willing to contact their reps.  I love how the art, music and medical expertise of my friends came together for this news segment filmed in my backyard when I lived in CT during CDC's CMV Awareness week: News 8: Mystic mother raises awareness of CMV, a risk for pregnant women and their babies (Sarah Cody, June 13, 2018): https://www.wtnh.com/on-air/connecticut-families/mystic-mother-raises-awareness-of-cmv-a-risk-for-pregnant-women-and-their-babies/1235975184/
Scriptures for Inspiration
https://www.biblestudytools.com/bible-verse-of-the-day/
###
1) Bernstein, Peter L., Wedding of the Waters: The Erie Canal and the Making of a Great Nation, W. W. Norton & Company; Illustrated edition (February 17, 2006), p. 319
2) Ibid
3) Cannon, M.J., Davis, K.F. Washing our hands of the congenital cytomegalovirus disease epidemic. BMC Public Health 5, 70 (2005). https://doi.org/10.1186/1471-2458-5-70
Posted by Lisa Saunders at 4:30 AM No comments: