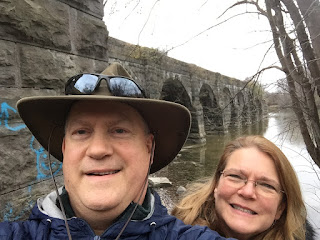 Photo caption: Jim and Lisa Saunders below ruins of the Erie Canal's Richmond Aqueduct jutting partially across the Seneca River. The second largest aqueduct on the Old Erie Canal, the Richmond Aqueduct allowed mules to haul barges across Seneca River in Montezuma in  the 19th century. Want to find it? Park at Montezuma Heritage Park, 8098 High St., Montezuma, New York, or in the parking lot on nearby Chapman Rd.  Both locations feature a large map and marked trails to sites relevant to the four canal systems found in this remote location. You will see the 1) first Erie Canal, known as Clinton’s Ditch; 2) enlarged Erie Canal (knowns as the Old Erie Canal) towpath, which leads to the remains of the Richmond Aqueduct on Seneca River and to 3) present-day New York State Barge Canal System, completed in 1918, and later renamed Erie Canal. You will also see: 4) remains of Cayuga-Seneca Canal. Get map: http://www.montezumahistoricalsociety.org/friends-of-the-park/visit-the-park/

I think we will be signing another year's lease for our apartment. It's too hard to give up the excitement tinged with danger here.  It's like living in Alfred Hitchcock's movie, "Rear Window." The latest crime solved involved package theft. When our third package went missing from the mail area, the office advised us to call the police because other neighbors also had missing packages, with some items found in a pawn shop. As the bulletproof vested policeman questioned Jim in our dining room, I wondered what he thought as Jim detailed the theft of his 6-pack of underwear. Though not likely to be found in a pawn shop, Jim wanted to delay ordering more, thinking the police might be able to retrieve it. Annoyed when I said he really wouldn't want it back, he complained, “But it’s very special underwear!” Feeling a little fearful we were pressing charges against the thief, the policeman assured me we wouldn’t have to go into witness protection. I've attached a photo of Jim spying on the guy who got caught. Don't you love his spyglass? 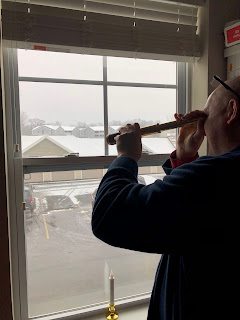 Unfortunately, we missed something truly exciting on December 2 when we didn't hear the sonic boom over Syracuse caused by a meteor soaring overhead. Living near hunting grounds and a firing range, we hear gunshots all the time so didn’t notice anything unusual. As our region is covered in a gray, cloudy dome from November-April, we didn't see the white streak across the sky either. With the cold weather now upon us, at least we no longer smell the liquid manure farmers use to fertilize their fields.

So far, what we love about apartment living is: 1) Jim calls maintenance nearly every day with issues such as appliance lights not turning on or off. They no longer pick up the phone when they see his number - I now call from my cell if it's truly important!; 2) Watching the leaves and snow fall all around knowing we don't have to do anything about it; and 3) Watching our grandchildren's joy when running up and down the long halls and pressing all the elevator buttons (our neighbors must love that, too), and using our pool and gym when open.

Jim thrives on being semi-retired. He now has time to focus on domestic problems. I was just informed that he wants to schedule a time with me to demonstrate the proper loading of our dishwasher. After all these years of trusting me in this regard, he thinks I need some lessons on efficiency.

Normally, I dread decorating for Christmas (seems so pointless since you have to undo it later), but it was fun this year now that our grandchildren help. Elizabeth loves changing Baby Jesus' diaper in the manger and Paul enjoyed counting the number of ornaments he put on our tree. Jim's string lights on our second-floor balcony are creating quite a stir, prompting one couple to try to outdo him. Detail oriented like Jim, the husband pointed up to our balcony and yelled, "Hey, I think you missed a spot." That husband is newly retired, too.

Although my mom still hates being held hostage in assisted living (per governor's orders because of Covid-19), she is now finding joy in her recently adopted, 6-month old rescue kitty named Mena. The other night, while Mom was asleep in her bed, Mena pulled on the emergency cord. A frantic staff member raced into Mom’s apartment to see if she was OK. At least I know the "help" pull-cord works.

I am trying to solve some mysteries as we intermittently trek the 360-mile long Old Erie Canal towpath--the upstate NY corridor from Albany to Buffalo. Steeped in more drama and mystery than our apartment complex, I'm now trying to get a hold of the nearly 80-year-old coroner's report on my Aunt Rebecca of Hamlin (Brockport), wondering if she really killed herself by driving into the Erie Canal. I want to know why the coroner determined she died "by suicide while temporarily insane." How did he know she wasn't murdered and driven into the canal or that she wasn't the victim of a hit-and-run? Aunt Rebecca  went missing on a Saturday, Nov. 8, 1941, and was found underwater the following Wednesday. My local librarian is helping find clues, like the Brockport newspaper article headlined, HAMLIN LADY FOUND DEAD IN SUNKEN AUTOMOBILE, stating: "A 37-year-old Hamlin woman, Mrs. Rebecca Whyland, who had been missing from her home in the Chase Road since Saturday was found dead in her automobile, which was located at the bottom of the Barge canal, last night, between the Lake road and Sweden-Walker road, about two miles east of this village. Lester Whyland, her husband, reported to Sheriff Skinner that she left home, Saturday, on a shopping trip and when she did not return, that evening, he reported her missing. Following a "hunch," Mrs. Whyland's brother-in-law, Ray Conley of Hilton searched along the Canal bank until he noticed tire marks going into the Canal. The sheriffs office was notified and for an hour a boat hook was used along the bottom of the canal. Finally, it struck the car in the center and a tow truck was called. When the car was raised, Mrs.  Whyland's  body was found jammed under the steering wheel and the top of the automobile was crashed as  though hit by passing barges."

Wouldn't a barge have reported that they hit an object in the canal? Jim wants to know if she was wearing the "yellow diamond" ring when her body was found. According to my cousin Laura, her family feared there may have been a curse around it as two of our family members who owned it died at age 37. Prior to Aunt Rebecca, my great-grandmother Alice Lee owned the ring and died from leukemia at 37. Prior to her, my uncle Frank owned it and hung himself (he was in his 20s). According to Cousin Laura, Uncle Frank "bought it and proposed to a lady who turned him down. He was so distraught and depressed  that he hung himself in the barn." (When Cousin Laura's family sold the "yellow diamond" ring set in a Tiffany setting, it was learned that it was actually a yellow sapphire.)

I'm also looking into the 1826 case of the missing, probably murdered Freemason William Morgan who was trying to publish a book exposing Freemasonry's secrets. The "Morgan Murder" caused division in my 19th century family who lived along the Canal per a family letter I read from my 4th great-grandfather, banker William Sisson of Lyons (a Freemason), to his brother-in-law, my distant uncle, Justus Gale of Rochester, who supported the Anti-Mason movement.

If any of you have any Erie Canal stories or tips on how to solve old "Cold Cases", please let me know as I'm currently working on a new book, “Walking the Erie Canal Trail: Secrets  of the 8th Wonder of the World, CMV and Pandemic Pizza".

2 Corinthians 4:16-18  “ Therefore we do not lose heart. Though outwardly we are wasting away, yet inwardly we are being renewed day by day. For our light and momentary troubles are achieving for us an eternal glory that far outweighs them all.  So we fix our eyes not on what is seen, but on what is unseen, since what is seen is temporary, but what is unseen is eternal.”